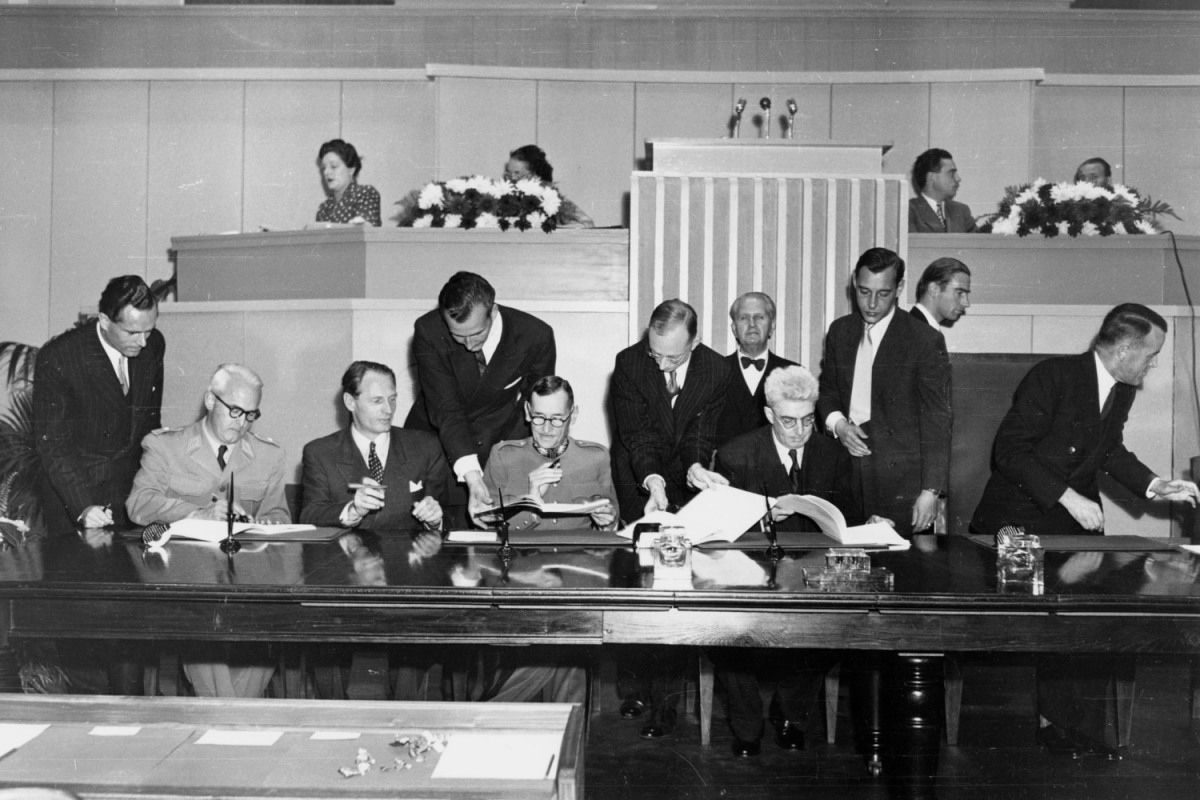 (This is a modified version of a post/article that was first published on the Cambridge International Law Journal (CILJ) Blog. It is reproduced here with the permission of the CILJ Editors)

The International Court of Justice (ICJ) has recognised the right to self-determination as an obligation erga omnes and an essential principle of contemporary international law. The sanctity of this right is also preserved and explicitly recognised under Art. 1(4) of the Additional Protocol I (API) wherein the struggles of people ‘fighting against colonial domination and alien occupation and against racist regimes in the exercise of their right of self-determination…’ are recognised as international armed conflicts. This is supplemented by Art. 96(3) of API whereby an authority representing a people may unilaterally declare their intention to be bound by the Geneva Conventions of 1949 (GCs) and API. Consequently, the rights and obligations thereto apply equally between the authority and the High Contracting Party.

With the API nearing universal ratifications (174 States) the right to self-determination seems firmly grounded under the IHL regime. However, this is not entirely the case as there is potential of such conflicts occurring between Non-State Actors (NSAs) and Non-State Parties of API as well as State Parties of API which have construed the aforementioned provisions narrowly. (See for example the Declaration of France and the Understanding of the Philippines vis-à-vis the instrument of ratification). Naturally, States resisting such an armed struggle may be reluctant to accord the extended protection of IHL to what they may deem ‘rebels’ or ‘terrorists’. At the same time, such an extended protection would also entail the legitimization of the struggle – something which the State in question may want to avoid.

As universally ratified instruments, this is where the GCs come into play. Although there is no explicit provision within the GCs, arguments have been advanced to extend it in a similar manner to the API by distinguished authors such as Schindler, Abi-Saab and Kussbach. These arguments hinge on either the provisions relating to accession codified in Arts. 60 GCI, 59 GCII, 139 GCIII and 155 GCIV or the application of the GCs on an ad-hoc basis as enshrined in Common Article 2(3) of the GCs.

Their arguments rest on the use of the word ‘power’ instead of ‘State’ or ‘High Contracting Parties’, which in their opinion is a more expansive term. This argument is furthered owing to the exclusive usage of the term ‘power’ in the paragraph (3) when the rest of the Common Article 2 uses the term ‘High Contracting Parties’. Thus they argue that such a use was deliberate on the part of the drafters and was either intended, explicitly, to cater to self-determination movements, or can now be interpreted in such a manner. The latter is argued on the basis of subsequent developments in international law, which have been discussed at length below. However, even at the outset, this seems to be inconsistent with the intent of the drafters. For instance, in relation to Art. 2(3), when the ‘Special Committee of the Joint Committee’ adopted the text, the Rapporteur explained it to be applicable ‘to the non-Contracting adverse State’(emphasis added). Similarly, the Commentary to the accession provision is also among the same lines. It states that the ‘invitation is addressed to all States…’ (emphasis added). This is also consistent with the intent of the drafters at the time which deemed wars of liberation as non-international armed conflicts.

That being said, international law does not remain stagnant to the developments which take place after a convention has entered into force and thus the developments that have taken place after the GCs must also be taken into account. Here, UNGA Res. 3103 (XXVIII) (1973), among many others, is very important. The resolution was approved by 83 States with 13 against and 19 abstentions. It specifically extends the protection afforded by the Third and Fourth GCs to ‘fighters’ engaged in a struggle for ‘self-determination’. Although not binding, the language adopted by the resolution seems to, prima facie, go beyond a mere urge to the parties. Paragraph 6 of the resolution deems it a violation of international law if ‘combatant status’ is not afforded to such fighters. Yet, by only emphasising the applicability of the Third and Fourth Convention as opposed to the GCs as a whole, gives rise to the inference that the resolution did not envisage an application of the GCs in their entirety. Consequently, without prejudice to the linguistics that may have been adopted, in totality, it would appear that the resolution may be construed as nothing more than a mere urge to the parties to apply the GCs. In any event, as noted by the ICJ in Nicaragua, UNGA resolutions only serve as ‘evidence’ of the existence of customary law, the corollary being that, in and of themselves, these resolutions would not be sufficient to alter the provisions in question. Indeed, as Sassoli puts it ‘there are some 500 articles in those treaties!’. Thus in the absence of an explicit provision, it would be very difficult to reconcile these resolutions with either the accession provisions or through the application of GCs on ad-hoc basis.

The Role of Treaty Interpretation in Light of Subsequent Practice

Even for the purposes of treaty interpretation, the thinking of the drafters is not a decisive factor. As the ICJ noted in the Namibian Advisory Opinion, treaty interpretation cannot remain unaffected by subsequent developments in law (See also Art. 31(3)(b) of the Vienna Convention on the Law of Treaties, 1969). Moreover, the Court also noted that there is a duty to harmonise international law with that which is prevailing at present. However, all such ‘subsequent practice’ in the application of the GCs must be ‘concordant and consistent’, such that it is capable of altering the interpretation of the aforementioned provisions.

In 1960, the Gouvernement Provisoire de la République Algérienne (Provisional Government of the Republic of Algeria), deposited an Instrument of Accession. The Swiss Government (depository of the GCs and a party) and the French government entered a reservation to their accession prior to Algeria becoming an Independent State. Similarly, on 21st June 1989, the depository received a letter from the Permanent Observer of Palestine to the United Nations to accede to the GCs and its Additional Protocols. Almost three months later, this was rejected owing to the uncertainty within the international community as to the exact status of Palestine as a State. Thus, it appears that the very few developments that do exist, seem to favour an interpretation which accords with the ‘object and purpose’ of the convention i.e.  exclusively applicable between States except Common Article 3 of GCs.

These elements, coupled with the need for an explicit provision to be inserted within API, illustrate that the provisions relating to accession and Common Article 2(3) of the GCs were not tailored to fit self-determination conflicts. Additionally, there is almost a complete absence of either ‘subsequent practice’ of the GCs being applied in such a way. In such circumstances, recourse may be sought through declarations under Art. 7(4)(b) of the Convention on Certain Conventional Weapons (CCW) which allows for the applicability of the GCs alongside the CCW and its Protocols even if the authority is not a party to API. This route should also be considered by NSAs, particularly when the State in question is not a party to API but is a party to the CCW.That said, the parties are also free to deposit deeds of commitment to abide by the GCs such as the South West Africa People’s Organisation (1981) or Palestine Liberation Organisation’s undertaking in 1982. Alternatively, through the initiative of an NGO named the Geneva Call, NSAs have agreed to implement IHL with regard to the use of landmines. This is also not an uncommon occurrence, with 50 armed groups already having deposited such deeds. Even though these deeds of commitment can only serve as an urge to the State Party to apply the GCs and API inter se but they may change the perception of the international community towards NSAs, changing the language ‘rebels’ or ‘terrorists’ to an authority pursuing a legitimate right.